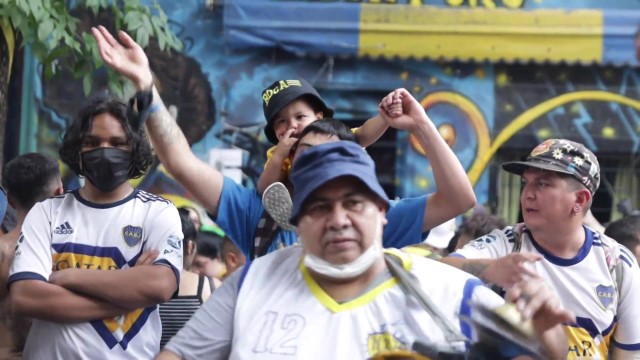 Hundreds of supporters of Boca Juniors also known as ‘Xeneize’ fans gathered in Buenos Aires on Saturday honoured the memory of the late football legend Diego Maradona when celebrating the Boca Fan Day. Despite no official celebration being planned due to the coronavirus pandemic, Boca Juniors fans met maskless, chanted, jumped with excitement, played drums, and danced. The celebration brought together fans of all ages happily commemorating the late Maradona, whom many considered a ‘God.’ «I am 48 years old, and I always have the same feeling for Boca. I will always carry it in my heart,» said Nidia Ledesma, a supporter. Many fans carried flags and wore Maradona’s jerseys. «Being a Boca fan is the biggest thing that happened to me. Being a Boca fan represents everything in my life,» said Blas Bejarano, a young fan. Boca Fan Day has been celebrated since 2012, on December 12, in reference to a supporter nicknamed ‘player number 12’ who accompanied and financed the Boca Juniors delegation in their 1925 European tour filled with victories. The denomination was later applied to every Boca Juniors fan.
https://ruptly.tv/