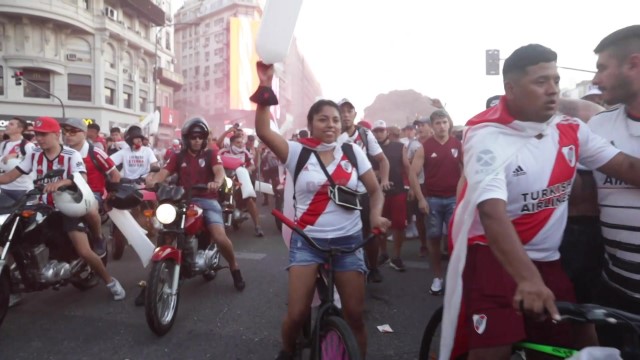 Thousands of River Plate football fans celebrated in the streets of Buenos Aires on Wednesday to mark the second anniversary of their club’s 3-1 win in the final of the 2018 Copa Libertadores in Madrid. Fans who had gathered in the city centre close to the Obelisk monument, cheered and waved club flags before proceeding towards the Belgrano area of Buenos Aires where River Plate’s stadium is located. «Every December 9th, I will celebrate like never before, as if it were yesterday. Because that day is unforgettable, the day the ‘Bosteros’ (derogatory term for Boca Juniors supporters) died,» roared celebrating River Plate fan Enzo Sebastian Venzo. River Plate and Boca Juniors, both clubs from Buenos Aires, are two of the most successful and popular clubs in Argentina, sharing a rivalry in one of the most fiercest football derbies in the world.
https://ruptly.tv/